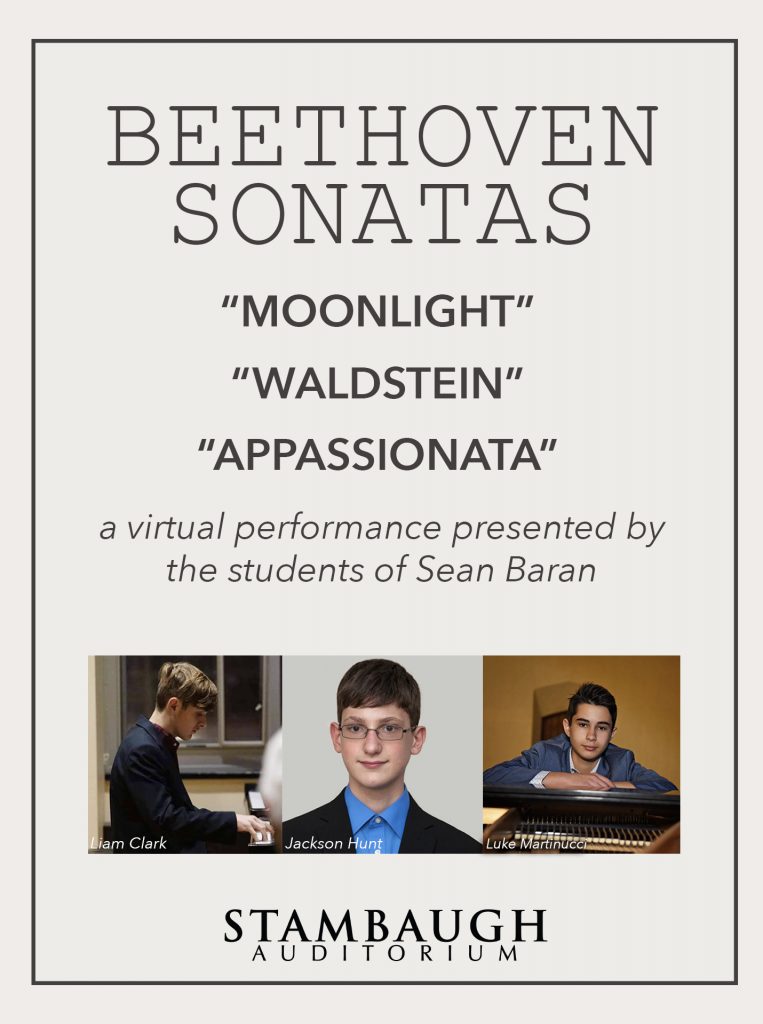 The Moonlight, Waldstein, and Appassionata sonatas exemplify the heroic struggle associated with Beethoven’s music while also pushing the expectations of the pianists. The soloists that will be featured are Liam Clark, Jackson Hunt, and Luke Martinucci.

Liam Clark is a freshman at Lincoln Park Performing Arts Charter School. In addition to his piano playing, Liam is a highly skilled craftsman specializing in making knives. Jackson Hunt is a junior at Lincoln Park Performing Arts Charter School. Jackson’s piano playing and composing has earned him state and national awards and has been heard in prestigious venues such as Carnegie Hall. Luke Martinucci is a senior at Ursuline High School. Luke’s love for piano and music has led him to participate in many festivals and competitions such as the Cleveland Institute of Music’s Summer Sonata. The recital is sponsored by Stambaugh Auditorium, recorded and produced in the Concert Hall.

Liam Clark is a freshman at Lincoln Park Performing Arts Charter School in Midland, PA. He is a music major and studies piano under Sean Baran. He focuses primarily on playing classical and ragtime songs. In addition to music, Liam has studied Brazilian Jiu Jitsu and grappling for the past eight years. He has been making and selling knives for the past few years. He purchased a 1992 Camaro with his knife-making money and is fixing it up in time for his sixteenth birthday. His hobbies include metal detecting, bottle hunting, and collecting coins. Liam enjoys designing, building, and solving problems. He currently is considering a future in engineering or industrial design.

Jackson Hunt is 17 years old and is a junior at Lincoln Park Performing Arts Charter School. He has had a passion for performing classical music and writing music since a very young age. He has won numerous awards for both piano performance and composition, including winning 3rd prize nationally at the MTNA Composition Competition for the past two years in a row! He has also received first prizes in the Keystone Composition Competition, the Steinway Jr. Piano Competition, the Pittsburgh International Piano Competition, the Pittsburgh Concert Society Competition, and the Lincoln Park Performing Arts Concerto Competition. He currently studies piano with Steinway Artist Yeeha Chiu and Sean Baran. He studies composition with Pittsburgh Area composer Robert Schultz, and violin with Rochelle Agnew. He has been a pianist for chamber and orchestra groups for the past several years, and currently plays piano and violin in the Lincoln Park Orchestra. Writing and performing music has brought Jackson great joy personally, and he hopes to be able to share that joy through his performance.

Luke Martinucci is a senior at Ursuline High School. He has been playing the piano since the age of 6 and has been studying piano with Mr. Sean Baran and composition with Dr. Haley Beverburg since the age of 10. Luke has performed at various venues including Bliss Hall at the Dana School of Music, Mixon Hall at the Cleveland Institute of Music, and Heinz Hall in Pittsburgh, Pennsylvania. He has also been competing for several years and was runner-up for the Middle-East district in the 2019 OMTA Buckeye Auditions. Outside of music, Luke has won many academic awards including the Chonko-DelBene Chemistry scholarship and the Lisa Higgins-Hussman Achievement scholarship. He was the captain of Ursuline’s varsity Quiz Bowl team, which went on to win both the Mahoning league and the Mahoning Tournament, this past year. Luke is also the valedictorian of his graduating class. After high school, Luke would like to go into medicine while completing a minor in music.

About the Teacher: Sean Baran is a pianist and organist based in Youngstown, Ohio. He graduated summa cum laude from Youngstown State University’s Dana School of Music with a bachelor’s and a master’s degree in music performance. At YSU, he studied piano with Dr. Caroline Oltmanns and organ with Dr. Daniel Laginya. In 2014, Sean attended the Zodiac Festival in Nice, France where he studied for two weeks with Francine Kay. In addition to maintaining a private piano studio in Youngstown, Sean is also currently a resident artist at Lincoln Park Performing Arts Center in Midland, PA where he runs the piano program for the Lincoln Park Performing Arts Charter School. Sean is also the organist at Boardman United Methodist Church where he runs the Boardman United Methodist Church Community Concert Series. He is also a member of the American Guild of Organists, having served as a member of the Executive Committee for the Youngstown Chapter.

Sean strives to merge performance with community engagement. Recent concerts organized by Sean have brought together multiple church choirs to raise money for the American Guild of Organists and the Boardman High School Choirs. Performances of holiday piano music at the Mill Creep Metroparks Fellows Riverside Gardens has allowed his music to be heard by more casual audiences. Sean served as the Youngstown Symphony Orchestra’s ensemble keyboardist during their 2018/2019 Stained-Glass and Classics series. In addition to his musical endeavors, Sean is an advocate for Youngstown and Mill Creek Park as well as an amateur photographer. He currently is a member of the Mill Creek Metroparks’ Environmental Advisory Committee.

Passionate about piano pedagogy, Sean’s students frequently receive the highest ratings at local adjudicated events and can be heard throughout the area in recitals and in master classes. Additionally, his students have earned first place and honorable mentions at competitions such as the OMTA Buckeye Auditions and the Allegheny College’s Unusual Combinations Piano Competition. Sean’s students have been heard participating in events such as the North-East Ohio Keyboard Festival and Cleveland Institute of Music’s Summer Sonata as well as various honors recitals hosted by YMTA, OFMC, OMTA, and the Steinway Society of Western Pennsylvania. Sean currently serves as the Secretary of Youngstown Music Teachers’ Association, Vice President of Student Activities of Ohio Music Teachers Association Middle East District, and District 1 Junior Counselor for the Ohio Federation of Music Clubs. In an effort to reach out to the community, Sean constantly works to offer unique opportunities for local students to utilize their artistic talents. Some recent student projects spearheaded by Sean include a special presentation of Beethoven Sonatas by his students at the historic Stambaugh Auditorium, the Youngstown Music Teachers’ Association Ribbon Festival and Pedals, Pipes, and Pizza at Trinity United Methodist Church in Youngstown which invited local music students to have their first encounter with a pipe organ.

Follow Sean online to learn more about his art: