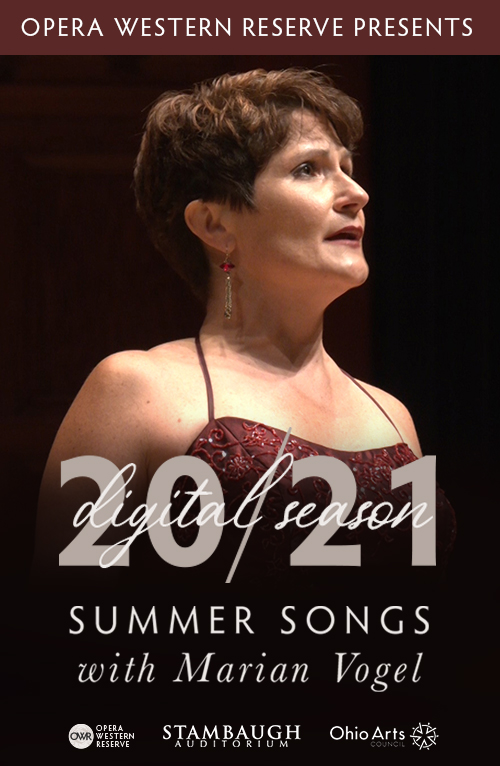 About
Artist Bio
Program
Sponsors
About

Marian Vogel is accompanied by pianist Benjamin Malkevitch in this digitally streaming recital, which was recorded in the Concert Hall at Stambaugh Auditorium. Vogel, has held the lead role in many Opera Western Reserve productions, including Cio-Cio San in “Madama Butterfly,” Mimi and Musetta in “La Bohème,” Violetta in “La Traviata,” Tosca in “Tosca, and Donna Elvira in “Don Giovanni.” The program includes opera favorites, show tunes, and some behind-the-scenes extras. 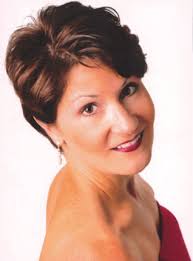 Soprano Marian Vogel made her Carnegie Hall debut singing the soprano solos in the Mozart Requiem and Rutter’s Magnificat under the baton of composer John Rutter. She has also performed on numerous occasions at Cleveland’s Severance Hall with the Cleveland Orchestra under the baton of Franz Welser-Möst, and recently with the orchestra on their European tour, including performances at the famous Musikverein in Vienna and in Luxembourg. She has performed many leading operatic roles, including Cio-Cio San in Madama Butterfly, Mimi and Musetta in La Bohème, Violetta in La Traviata, Tosca in Tosca, Donna Elivira in Don Giovanni, as well as many Gilbert & Sullivan heroines and musical theater roles. Equally at home on the concert stage, Ms. Vogel has appeared in major works across the United States and in Europe. Ms. Vogel is a two-time first prize winner of the Metropolitan Opera National Council District Auditions and the winner of the Belle O. Morse Young Artist Award. She is a graduate of the University of Cincinnati College-Conservatory of Music. 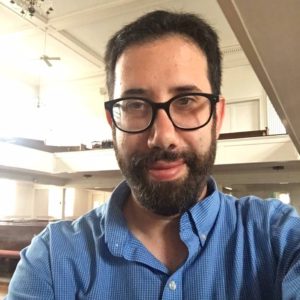 Ben Malkevitch is in demand as music director, vocal coach, collaborative pianist, and organist in Northeast Ohio. Since he moved back to Cleveland two years ago, he has conducted Resonanz Opera’s production Dialogues of the Carmelites and played for its production of L’enfant et les sortilèges. He has collaborated with Opera Western Reserve in Youngstown on productions of Lucia di Lammermoor and Carmen. Ben also recently played in the pit for the national touring productions of Wicked and The Sound of Music. Ben is the choir director and organist at Lakewood Congregational Church, as well playing services at Temple Emanu El. He is the accompanist for the Master Singers Chorale of Northeast Ohio and has music directed shows at the Beck Center for the Arts, Near West Theatre, and TrueNorth Cultural Arts.

From 2010-2015, Ben did a similar variety of work in the San Francisco Bay Area, where he was co-founder and music director of Waffle Opera, choir director at First Congregational Church of San Francisco, as well as collaborations with Livermore Valley Opera, West Edge Opera, Cinnabar Theater, the San Francisco Conservatory of Music, American Conservatory Theater, Throckmorton Theatre, and SFArtsED.

Ben has a special affinity for new music, American composers, the art song repertoire, and the fine art of designing supertitles for operatic performances. He is also an occasional composer, arranger, and baritone. He holds Master’s of Music in Collaborative Piano from the Cleveland Institute of Music, where he studied with Virginia Weckstrom.

ART IS CALLING FOR ME
by Victor Herbert

GIRL IN 14G by Jeanine Tesori and Dick Scanlan