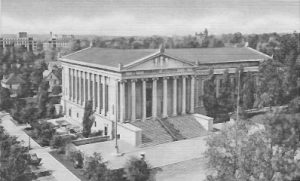 The concert hall was designed for musical performance and the fine acoustic quality has been compared to that of Carnegie Hall.

Stambaugh Auditorium is a fine example of Greco-Roman architecture and is on the National Register of Historic Places. Renovations are faithful to the original architectural style. Over the years many well known performers have appeared here. Stambaugh was the original home of the Youngstown Symphony and the Monday Musical Club had been at home at Stambaugh for 87 years.

When Stambaugh Auditorium was built it was done so at a cost of less than two million dollars.The structure was modeled after the public auditorium in Springfield, Massachusetts whose design was based on the Pantheon in Paris. The architect was Harvey Wiley Corbett of the New York firm of Helmle and Corbett Architects. Opening ceremonies for Stambaugh Auditorium were held December 5, 1926. The opening concert was held the next evening, sponsored by the Monday Musical Club. Will Rogers was the featured inaugural performer.