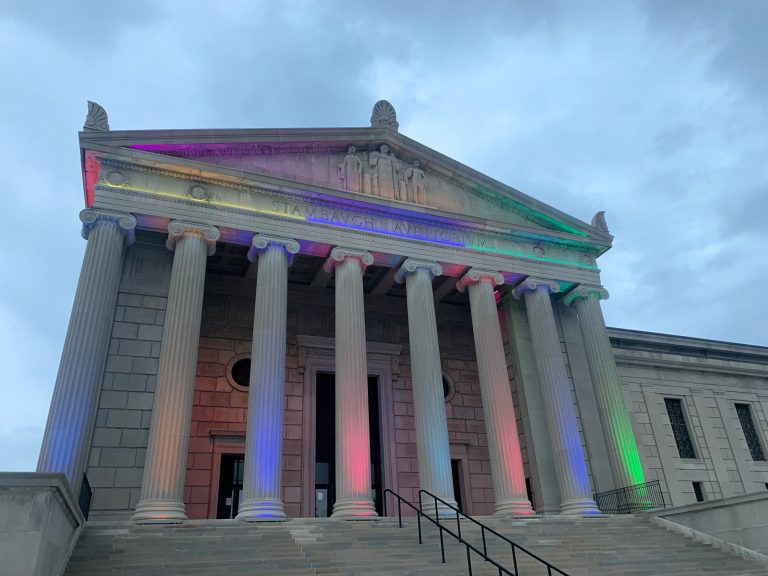 At an event held Wednesday, April 13, 2022, officials from Stambaugh Auditorium, members of the construction team, project donors, and elected officials viewed the exterior lighting enhancements which are a key component of the Stambaugh Auditorium Monumental Staircase and Facade Restoration Project. The event also marked the beginning of the final phase of fundraising and construction for the project.

The $4.1 million project includes replacing the monumental staircase and promenade, adding handicapped accessibility from the Stambaugh Garden to the promenade, cleaning the exterior of the building, and adding exterior lighting. Matt Pagac, Stambaugh Auditorium Chief Executive and Operating Officer, gave an update on the progress of the overall project and led a demonstration of the exterior lighting enhancements. The programmable RGBW LED lighting provides a full spectrum of colors with up-lighting that encircles the entire perimeter of the south end of the building, along with down-lighting to enhance the majestic pillars at the front entrance of the building. LED lighting has also been added to the new handrails on the staircase and within the handicapped accessible ramp. Additionally, energy efficient wall packs and electrical outlets have been installed for added illumination and to maximize electrical capacity for exterior events. Pagac said, “We are very close to completion of the project and are waiting on the finishing touches such as hardware for the entry doors, some final electrical work, and landscaping.” He said that the project should be completed by mid-June with a ribbon-cutting tentatively scheduled for June 14th.

the Community Foundation of the Mahoning Valley; $75,000 from the Pollock Personal and Company Foundations; $60,000 from the J. Ford Crandall Foundation; $50,000 from the Thomases Family Endowment of the Youngstown Area Jewish Federation; and $30,000 from the Premier Bank Foundation. Additionally, $1,350,000 has been committed through the State of Ohio Capital Budget appropriation. While a few key foundation proposals are currently pending, Stock added, “Our goal is to raise the remaining $500,000 needed for the project through the public phase of the campaign which is in progress now.”

PrevOlderTickets on sale now for Seussical Jr.
NewerOutstanding Young Organist, Nathaniel Gumbs, to perform at Stambaugh Auditorium Next
Previous
Next