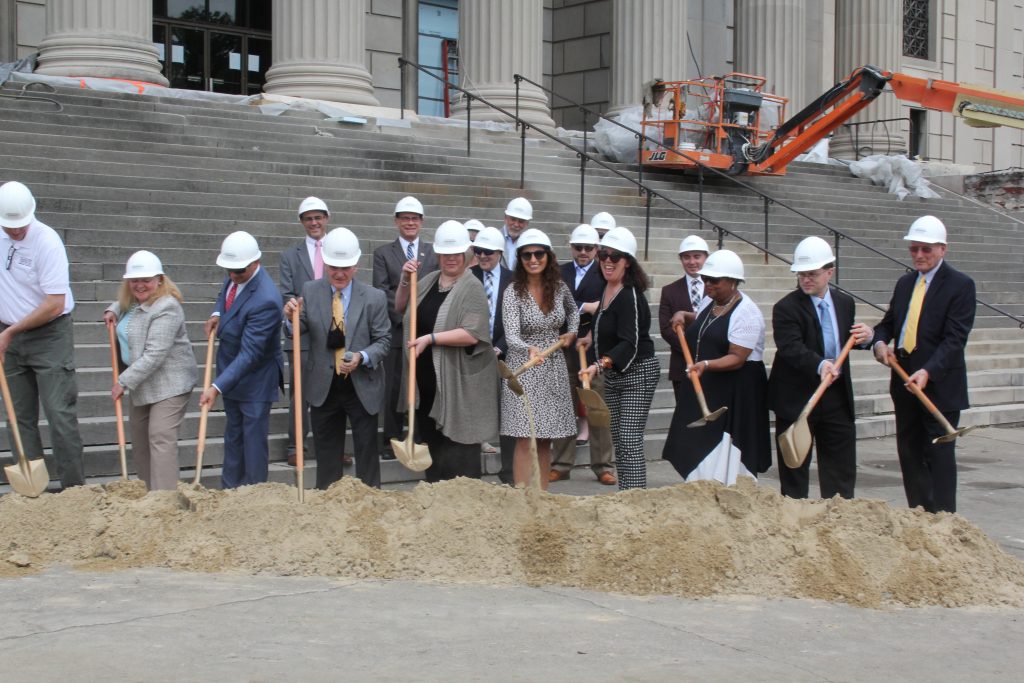 At a ceremony held Monday, June 7, 2021, officials from Stambaugh Auditorium, members of the construction team and elected officials broke ground for a major capital project involving the replacement of the monumental staircase and restoration of the exterior facade of the historic auditorium.

Mark Gasser, Stambaugh Auditorium Board President, said, “As members of the board we are committed to preserving the legacy left to this community by Henry H. Stambaugh. It is our duty to preserve and maintain not only this magnificent building, but to also preserve the founding mission of the organization.” Henry H. Stambaugh, who died in 1919, bequeathed funds to create an auditorium that was to be used for “the enjoyment, pleasure, entertainment and education of the community residing in Youngstown and surrounding community.” Henry’s final wishes became the mission of the Henry H. Stambaugh Auditorium Association and the building was constructed and opened in December, 1926. Gasser noted the extensive renovations that have taken place on the interior of the building and said, “As we approach the 100th anniversary of the opening of Stambaugh Auditorium, we have turned our attention to the exterior of the building.”

Matt Pagac, Stambaugh chief executive and operating officer, gave an overview of the project which will include replacing the monumental staircase and promenade, adding handicapped accessibility from the promenade to the Stambaugh Garden, cleaning the exterior of the building and adding exterior lighting. The budget for the entire project is $4.1 million. Pagac said that the project will be taking place all summer and is expected to be completed in November or December of this year.

Joe DeSalvo of DeSalvo Construction, general contractor, recognized the local subcontractors and building trades who will be working on the project. DeSalvo said, “We are committed to utilizing local contractors and local building trades for this vital project which will provide a much-needed boost to our local economy.” Denise Holt, architect and project manager with GPD Group, recognized the local architects and engineers who have been a part of the planning and design of the project.

JoAnn Stock, Stambaugh chief executive officer, reported that over $3,250,000 has been raised for the project with significant gift commitments coming from local foundations including; The Youngstown Foundation with a total of $750,000 including gifts from the Hine Memorial Fund and the Monday Musical Fund; $250,000 from The Frank and Pearl Gelbman Foundation and $250,000 from the Ward Beecher and Florence Simon Beecher Foundation, and $250,000 from
the Hynes-Finnegan Foundation, all at Huntington Trust, $150,000 from the John S. and Doris M. Andrews Memorial Fund of the Community Foundation of the Mahoning Valley; $60,000 from the J. Ford Crandall Foundation; $50,000 from the Thomases Family Endowment of the Youngstown Area Jewish Federation. Additionally, $1,350,000 has been committed through the State of Ohio Capital Budget appropriation. Stock added, “Our goal is to raise the remaining $750,000 needed for the project through the public phase of the campaign which begins now.” A page on the Stambaugh Auditorium website (www.stambaughauditorium.com) has been devoted to the project and includes a project overview and updates, giving information and a live construction cam.