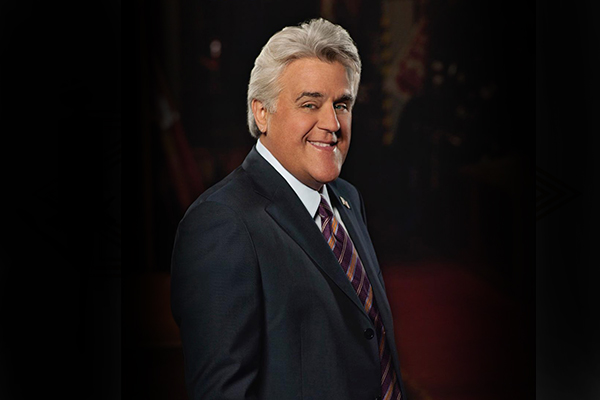 Jay Leno will be live on stage at Stambaugh Auditorium on Sunday, October 21 at 7:30 PM, presented by Stambaugh Auditorium and SRO Promotions. Tickets will go on sale this Friday, August 3 at 10:00 AM. Re- served seats range in ticket price from $45-$85 plus applicable fees.

Jay Leno dominated late night television for more than two decades on air with “The Tonight Show with Jay Leno,” ending in 2014 when he passed the torch of succession to Jimmy Fallon. The automotive aficionado then found himself with a successful primetime series, “Jay Leno’s Garage” on CNBC, of which he is a pro- ducer as well as the star. Additional to his award winning television shows, Leno is the recipient of the Peo- ple’s Choice Award and other honors, including the Harris Poll selection as most popular star on television. He also received a star on Hollywood’s Walk of Fame, has set several land speed records and became the first person to drive the pace car of all major NASCAR events.

A tireless performer, Leno loves to test his humor live on audiences across the nation, performing over 100 live appearances in nightclubs, theaters and stadiums each year. His “everyman” style and personality have helped him earn millions of fans worldwide, especially in the regions where people relate to his personable style and work ethic. He remains passionate about performing in front of live audiences, including the mili- tary, and appears regularly in Las Vegas, on college campuses around the United States and in many other venues.

When he is not performing, writing or doing charitable work, Leno keeps busy doing voice-over work in such movies as “Cars” and “Igor” and the hit TV show “The Fairly Oddparents.” He also is a much-in-de- mand corporate speaker and is a monthly columnist in “Popular Mechanics.” Leno enjoys working on his collection of classic cars and motorcycles as well.

Tickets for the 7:30 PM show will be sold through the Florence and Ward Beecher Box Office at Stambaugh Auditorium. Order by phone at 330-259-0555, online at stambaughauditorium.com, or in person. The box office is open Monday through Friday, 9:00 AM – 6:00 PM.