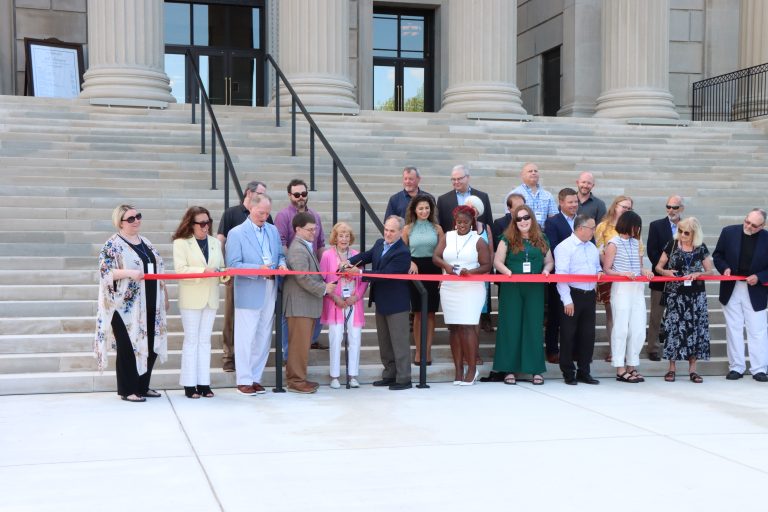 At an event held on Tuesday, June 14 at 6 p.m., officials from the Henry H. Stambaugh Auditorium Association, members of the construction team, project donors, and elected officials took part in a ribbon cutting ceremony that marked the official re-opening of the monumental staircase and promenade which was restored during a year-long restoration project.

The $4.1 million project included replacing the monumental staircase and promenade, adding handicapped accessibility from the Stambaugh Garden to the promenade, cleaning the exterior of the building, and adding exterior lighting. Matt Pagac, Stambaugh Auditorium Chief Executive and Operating Officer, gave an overview of the project and thanked the project architect, engineers, contractors and local building trades who worked throughout the past year to complete the project. The United States flag was raised on the newly renovated flag pole followed by the playing of the National Anthem by Stambaugh Youth Concert Band alumni.

Mark Gasser, President of the Henry H. Stambaugh Auditorium Association Board of Directors, said, “As members of the Board, it is not only our responsibility to oversee the operations of the Auditorium, but to preserve this historic landmark for generations to come.” On the National Register of Historic Places, Stambaugh Auditorium represents the gateway to downtown Youngstown from the Northside and historic Fifth Avenue and Wick Park neighborhoods.

JoAnn Stock, Stambaugh Auditorium Chief Development Officer, said, “It is our responsibility to continue the wonderful legacy left by Henry H. Stambaugh 100 years ago. Henry’s legacy, to create a space for the enjoyment, entertainment, education and pleasure of the people of Youngstown and the surrounding communities became the mission of Stambaugh Auditorium.” Stock added, “We are so grateful for the support of our donors who help to preserve legacy for future generations.”

Stock reported that the Stambaugh Auditorium Capital Campaign Committee, led by co-chairs Bill Conti, Emeritus Board Member, and Scott Schulick, current Vice President of the Stambaugh Auditorium Board of Directors, has been hard at work raising the additional $500,000 needed to complete the project. Over $3.6 million has been raised for the project thus far, with significant gift commitments coming from local foundations including: $750,000 in gifts from Trusts managed by Huntington Bank including gifts of $250,000 from The Frank and Pearl Gelbman Foundation, $250,000 from the Ward Beecher and Florence Simon Beecher Foundation and $250,000 from the Hynes-Finnegan Foundation; The Youngstown Foundation with a total of $750,000 including gifts from the Hine Memorial Fund, the Williamson Fund, the Darling Fund; and the Monday Musical Fund; $175,000 from the Betty H. Brown Jagnow Revocable Trust; $150,000 from the John S. and Doris M. Andrews Memorial Fund of the Community Foundation of the Mahoning Valley; $75,000 from the Pollock Personal and Company Foundations; $60,000 from the J. Ford Crandall Foundation; $50,000 from the Thomases Family Endowment of the Youngstown Area Jewish Federation; and $30,000 from the Premier Bank Foundation.

Additionally, $1,350,000 has been committed through the State of Ohio Capital Budget appropriation. A few key foundation and major gift proposals are currently pending. “Our goal is to raise the remaining $500,000 needed for the project through the public phase of the campaign which is in progress now,” Stock said.

A page on the website has been devoted to the project and includes a project overview, updates, and giving information. For more information, contact JoAnn Stock at 330-747-5175 or jstock@stambaughauditorium.com.