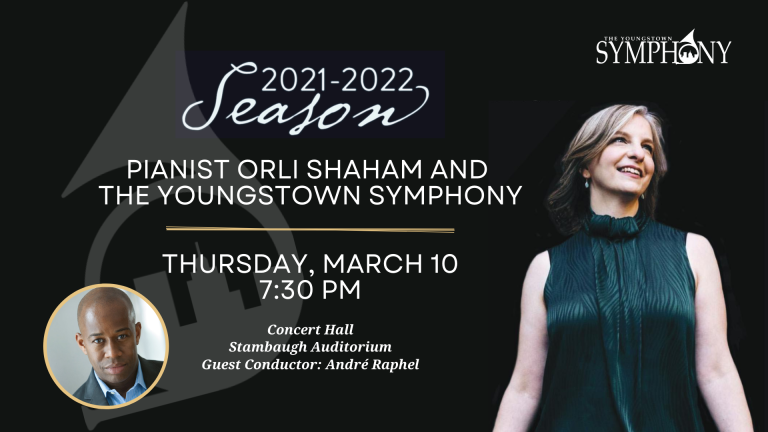 André Raphel is a dynamic and versatile conductor hailed for his profound musical performances. Raphael served as the Music Director of the Wheeling Symphony Orchestra from 2003 to 2018. He has led critically acclaimed festivals, world premieres, and commissioned works by Jennifer Higdon, Richard Danielpour, Ellen Taaffe Zwilich, and more. He enjoys an active career as a guest conductor; in recent seasons, he has appeared with the Detroit Symphony Orchestra, Pittsburgh Symphony Orchestra, The Cleveland Orchestra, and the New York Philharmonic. Raphel has a strong commitment to education and community engagement, which is reflected in his work at leading conservatories and training programs. During his tenure with the Saint Louis Symphony, he served as Music Director of the orchestra’s In Unison program, a partnership between the orchestra and local churches.

Orli Shaham has established an impressive international reputation as one of today’s most gifted pianists. She has
performed with most of the major orchestras in the United States and with many significant ensembles internationally, including the BBC Symphony Orchestra, Israel Philharmonic Orchestra, and Sydney Symphony Orchestra. Shaham is also a co-host and creative for NPR’s “From the Top,” and on faculty at The Juilliard School. She serves as the Artistic Director for the interactive children’s concert series, Orli Shaham’s Bach Yard, which she founded in 2010. The concert programs provide hands-on activities with musical instruments, concepts, and concert performances that promote good listening skills, and feature chamber music performances by professional musicians with Ms. Shaham as host and pianist.

Single tickets for the March 10th concert range from $42 to $62, inclusive of all fees. Discounts are available for seniors and students. Tickets are available Monday through Friday, 10:00 AM – 5:00 PM by calling 330-259-9651, or in person at the DeYor Performing Arts Center. Tickets are also available 24 hours a day online at: youngstownsymphony.com, deyorpac.org, and stambaughauditorium.com.