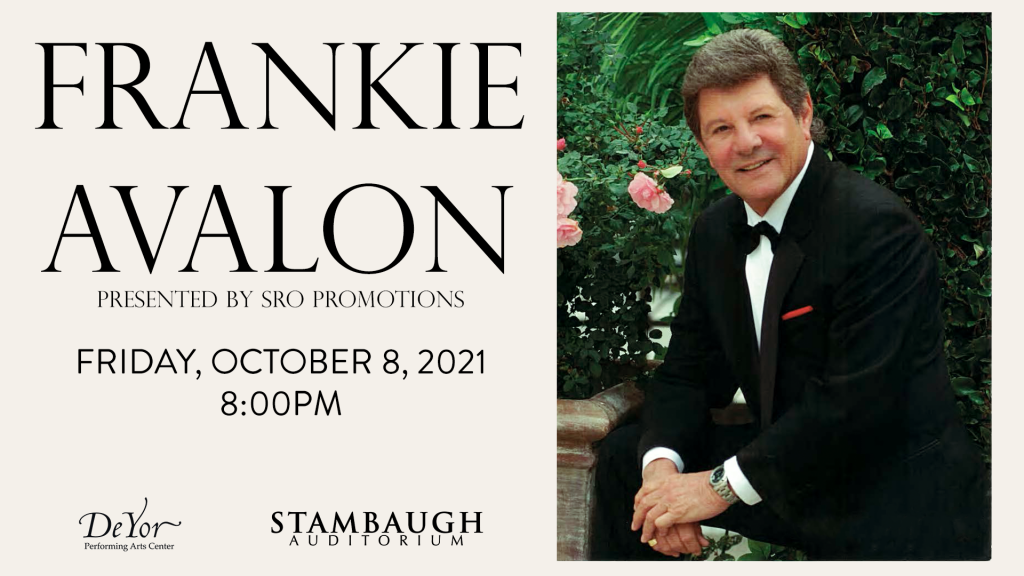 On Friday, October 8, 2021, at 8:00 pm Stambaugh Auditorium and SRO Promotions will present Legend of stage and screen, Frankie Avalon, in Edward W. Powers Auditorium at the DeYor Performing Arts Center. Tickets will go on sale this Friday, July 23 at 10:00 am. Ticket prices range from $54 – $84 including applicable fees.

Avalon dominated the music charts for years with dozens of popular songs in the 50’s and 60’s including number one hits “Venus” and “Why”. Avalon’s string of Gold Record Million-Seller singles and albums included 31 charted hits. In 1959 alone, Frankie had six hits that were in the top 40 and his music became one of the defining sounds of “Pre-Beatles” Rock and Roll. Avalon also achieved fame on the silver screen with his 30 motion picture credits. Most notably, he starred alongside actress Annette Funicello as the romantic leads in the popular Beach Party movies in the 1960’s.

Tickets will be available at both the DeYor Performing Arts Box Office by calling 330-259-9651 and the Florence and Ward Beecher Box Office at Stambaugh Auditorium by calling 330-259-0555. Both box offices are open Monday through Friday, 10:00 AM – 5:00 PM. Tickets will also be available 24 hours a day online at deyorpac.org and stambaughauditorium.com.