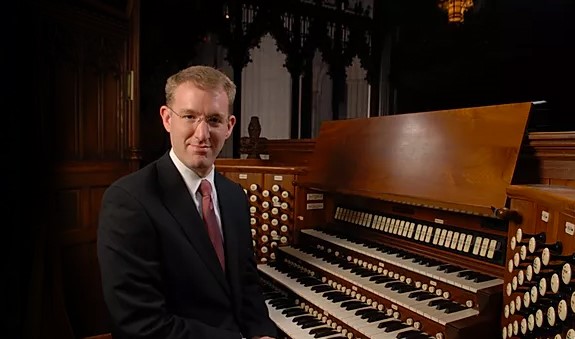 On May 31st at 4:00 PM, one of America’s leading concert organists, Scott Dettra, will be performing at Stambaugh Auditorium. Mr. Dettra’s playing is praised for its clarity, rhythmic intensity, and musical elegance, and has been described by The American Organist as “music-making of the absolute authority and sophisticated expression.”

Scott Dettra is a native of Wilmington, Delaware, and began piano study at age three and organ study at age eight, holding his first church position at the age of nine. Mr. Dettra holds two degrees from Westminster Choir College in Princeton, where he was a student of Joan Lippincott, and also studied organ and jazz piano at Manhattan School of Music. He combines an active performance schedule with his post as Director of Music at the Church of Incarnation in Dallas. He is also a member of the organ faculty at Southern Methodist University and is organist of The Crossing, the Grammy-award winning professional chamber choir based in Philadelphia.

Mr. Dettra has been a featured performer at national conventions of the American Guild of Organists, The Association of Anglican Musicians, and the Association of Lutheran Church Musicians. He is featured on many recordings, including Majestus and Tongues of Fire. In addition to commercial recordings, his performances have been broadcasted numerous times on radio programs such as American Public Media’s Pipedreams and Performance Today, The BBC’s Choral Evensong, and The New York Philharmonic This Week.

Tickets for the May 31st concert are on sale now. Ticket prices range from $7-$12 including applicable fees. For tickets, call 330-259-0555, go to stambaughauditorium.com, or visit the Florence and Ward Beecher Box Office at Stambaugh Auditorium in person. The box office is open Monday through Friday, 9:00 AM – 6:00 PM and online at stambaughauditorium.com, 24 hours a day.